What makes this litigation boutique “Small but Mighty”?

By Ross FishmanDecember 16, 2021No Comments

How can smaller law firms market themselves?

We recently wrote about Hawley Troxell, Idaho’s largest law firm, and the split-image campaign that showed that not only were they big, they were also fast and flexible.  All true.

But what if you’re not the biggest firm? Or not big at all?  What can small firms or specialty boutiques use as their strategy, differentiator, or message? How can they compete against the large firms?

There can be a taint associated with being smaller–a perception that the larger firm is invariably the better firm.  In America, bigger means better.  The large firms have long been reputed to be more skilled, with the smarter lawyers.  They paid more, had more specialties, and recruited from the top law schools. If you’re the biggest firm in your market, we often recommend using that trait to your advantage.

Competing against these giants are high-quality smaller firms. For many reasons (e.g. lifestyle, culture, autonomy, no conflicts), they were smaller by choice. They offered an alternative for companies that didn’t want or need to hire a  costly large firm. In today’s economy, even the largest companies are finding great value in smaller law firms.

The problem many small firms have isn’t the quality of their skills.

It’s the quality of their marketing.

With fewer dollars to spend, they often get sub-standard marketing that conveyed a low-quality message.  That’s a huge mistake.  As I always say, “If you’re the smaller firm, you have less margin for error.  You have more to prove, you have to do all the little things well, particularly in your marketing.”

An ugly website won’t hurt Cravath.
It won’t harm their reputation or prevent their lawyers from getting hired. They’re still Cravath (or Wachtell, or Davis Polk…).  That is, their strong brands have ensured that their skills aren’t in question. But when you’re the smaller or less-well-known firm, you must look at least as good as the big firms. (Frankly, I think you need to look better.) You have to do all the little things well, from the card stock on your business cards to the design of your website.

This leads us to one of our all-time favorite brands, Novack and Macey’s “Small but Mighty” campaign.  A small, high-end litigation boutique, they’re a big-firm spin-off that has chosen to stay small.  But they routinely beat up on big firms in court, when they’re not genially co-defending clients with them.

Many small firms are insecure.

During rebrands, we’ve often heard small-firm clients exclaim, “Don’t say we’re small!” As though if we didn’t admit it, no one would notice. Instead, I want to say, “You’re SMALL!  Don’t be embarrassed by it, OWN it!”

That is, leverage the many positive attributes — lean staffing, smaller teams, increased efficiency, more partner involvement, lower hourly rates — there are a lot of powerful messages in being small.

Novack and Macey likes being small.

They were confident in the high quality of their skills.  Led by two of Chicago’s top trial lawyers, Stephen Novack and Eric Macey, they had chosen to be small; it was their foundational strategy and business model.  We selected “Small but Mighty” (yeah, they got the double entendre, get over it…) as the tag line, and illustrated it with things from nature that were disproportionately powerful for their size. Nature’s crazy – we identified a lot of cool examples.

The first one’s above, a Tepin pepper.  It’s tiny, the size of a pea, but it’s among the world’s hottest peppers. It’s a nice metaphor for Novack and Macey’s trial lawyers. Small, but extremely powerful.  When we were hired to develop the branding campaign, they had just finished a brand-new website with a different company, so we simply redesigned the existing home page to add this campaign (above). 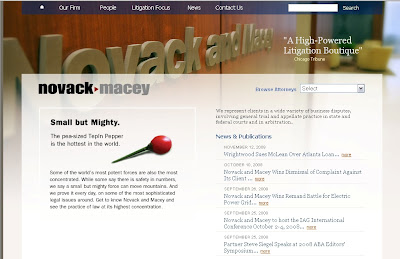 In an ideal world we’d have developed a new website around the new campaign–strategy first, then execution.  But realistically, it wasn’t worth starting over; layering a new brand on an existing website can be a simple and cost-effective solution under certain circumstances.

With a strong campaign, we worked with their terrific Marketing Partner, Monte Mann, to develop a variety of additional tools, including, e.g. buying wild Tepin peppers from Mexico and private-labeling them, sending out 2500 packets to the firm’s contacts, with a spicy salsa recipe and all the necessary “Don’t touch your eyes!” haz-mat warnings.  A fun and effective giveaway, many years later these are still sitting on executive credenzas all over Chicago. 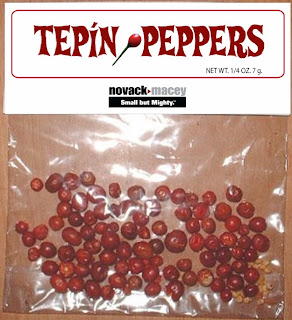 For the launch party, a brave partner and marketing committee member, John Shonkweiler, agreed to EAT one of the hot peppers, to help generate a front-page story in the Chicago Daily Law Bulletin: 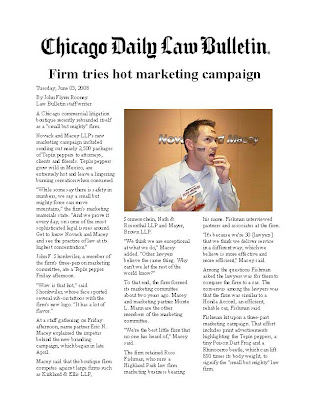 With this theme, we identified plenty of other visuals, which we explored throughout the campaign.  I’ll detail them later, stay tuned.  And if your firm is ready for an integrated marketing campaign, website, or social media/SEO, give us a call!  ross@fishmanmarketing.com or 1.847.432.3546.

Need a new brand or logo for your own firm?